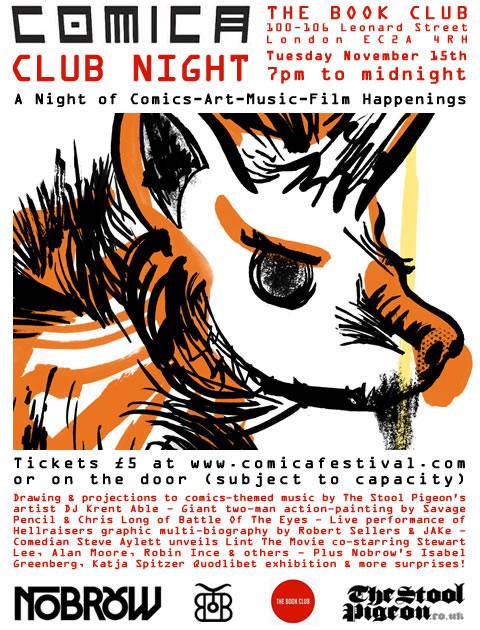 Here's the link to the Comica website, with full info and tickets; 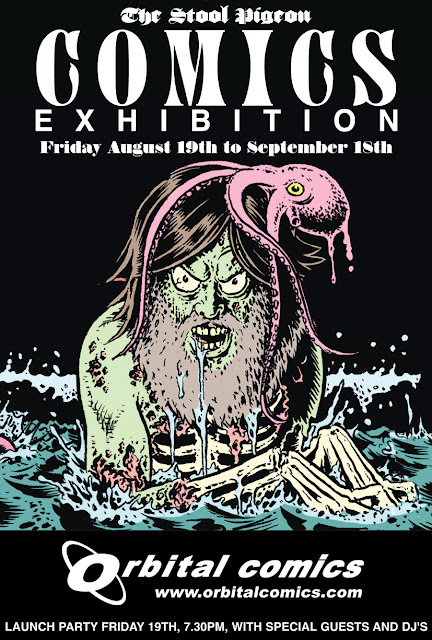 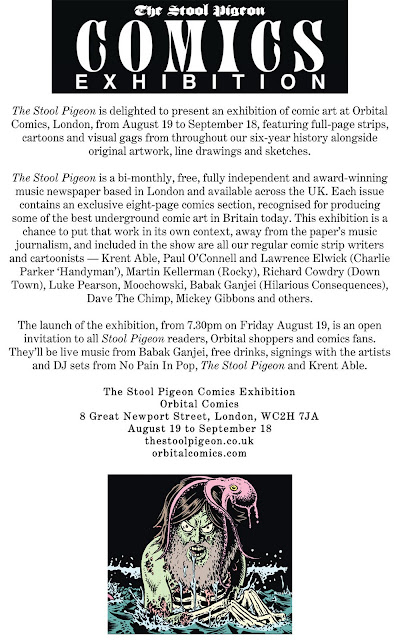 Nice review for the Stool Pigeon comics section from  PopMatters...


British Invasion #3: The Comics of the Stool Pigeon

Will the dying UK music print zines drag the indomitable2000 AD with them? The fates of the two very separate institutions maybe be entwined to a degree not yet expected.
When one first gets into comics it seems to be the case that you find yourself voraciously devouring them wherever they can be found, consuming them with the same kind of wild abandon that Roald Dahl’s Matilda did with books. The sheer speed at which comics can be read in this kind of fervour encourages – even demands – the reader to range much more widely in terms of origin, style and genre of those comics than they otherwise would. It’s a gleefully reckless phase, as littered with chance encounters with hidden genius as with equally useful opportunities to find out what you don’t like. It is against this backdrop that I have become fascinated with the independent alternative music zines doing the rounds at the moment, a few of which have made the inclusion of edgy underground comics a key factor in their appeal.
The UK’s print music press – as its online music press continually reminds us – is dying. The battles for circulation supremacy that characterised previous decades are over and sales are falling, NME is the only surviving weekly and monthlies like Q are increasingly criticised for a strategy of pandering to the lucrative mainstream as opposed to seeking out and covering “real” music, however defined. Alternative music zines have been around for many years, but it’s against this backdrop of the contemporary UK music press that they have acquired their current, peculiar character. Infused with a DIY ethic, an avant-garde sensibility and a thirst for controversial humour, the current generation of zines are providing a great potential stomping ground for comics – best exploited by The Stool Pigeon.
The Stool Pigeon has long been recognised as a place to find great independent music coverage; it is, after all, the print companion to The Quietus, one of the most respected music sites in the UK right now (incidentally they interviewed Alan Moore last year). When I first started reading, however, I certainly hadn’t expected to become a real fan of its comics section. Each month, the Pigeon contains a nine-page comics pull-out which makes for reading at least as absorbing as the music content, much of which is a powerful demonstration of what short-form British comics can be.
Although music-related comics are common, there’s no house style and the result is a varied and frequently anarchic selection of comics. Regular features include Paul O’Connell and Lawrence Elwick’s “Charlie Parker: ‘Handyman’” and the dark, bitter and long-running strip “Rocky” by Martin Kellerman of Sweden. The pull-out’s A3 format might not initially seem well-suited to the comics form, but the creators recruited by the Pigeon have turned it to their advantage. Luke Pearson is another regular contributor: his comics, recognisable by their distinctive style and warm colours, often made good use of the spacious pages he was given to play with. His addition to the May issue, “A Sound Arrangement” charts the ups and downs of the rock star lifestyle in a technique that recalls the many tiny panels of Chris Ware’s Jimmy Corrigan: the Smartest Kid on Earth. The real beauty of the strip is that, telling its tale largely without dialogue, it would look as good on a wall as it does in the paper.
The feel of anarchy comes in with series of strips like “Doctor Cave, M.D.” which appears uncredited but can be traced to its creator Krent Able. With a pointillism-influenced art style, the strip documents the adventures of Nick Cave of the Bad Seeds turned doctor, inflicting his OTT and profoundly tasteless remedies on the unsuspecting public. Strips like this are clearly the product of an enormous amount of work – in Able’s own words, his style “looks cool but [...] takes waaaay too long for a comic strip which people read in about a minute”. Make no mistake, though – it’s a fun minute.
The Stool Pigeon’s comics section is just part of a wider movement of cheap (or free) comics designed with accessibility at their core which is gaining momentum in the UK right now. But as a sneak preview into that world – and into the wider world of short-form British comics – this free supplement is actually invaluable.
Posted by Krent Able at 04:32 No comments:


Stool Pigeon – I’m here for the comics, I’ll stay for the music…

Another issue of Stool Pigeon arrives – the music paper with some comics in the middle (See hereand here for past issues). And bloody hell I actually recognise the cover star! And I know of 5 of the bands mentioned on the front (I even like two of them – Motorhead and Jesus & Mary Chain if you’re interested).
I’m not going to linger on the actual music bit of The Stool Pigeon, but I will say that it’s an enjoyable read, nicely designed and full of decent writing about a wide variety of musicians that I haven’t heard of. However, the writing is such that I’ve made a mental note to look out for them – which is always a good sign.
As for the comics, there’s some nice work in The Stool Pigeon, with Krent Able’s double page a must for me, spinning a typically bizarre bit of muical weirdness, with the three members of Kraftwerk acting in a most un Kraftwerk-ian manner – bloody good fun though. Richard Cowdry’s work you’ll be familiar with from his Somersault strips on the FPI blog, and you may well know Luke Pearson as one of the rising stars in UK comics right now:
Posted by Krent Able at 03:57 No comments: